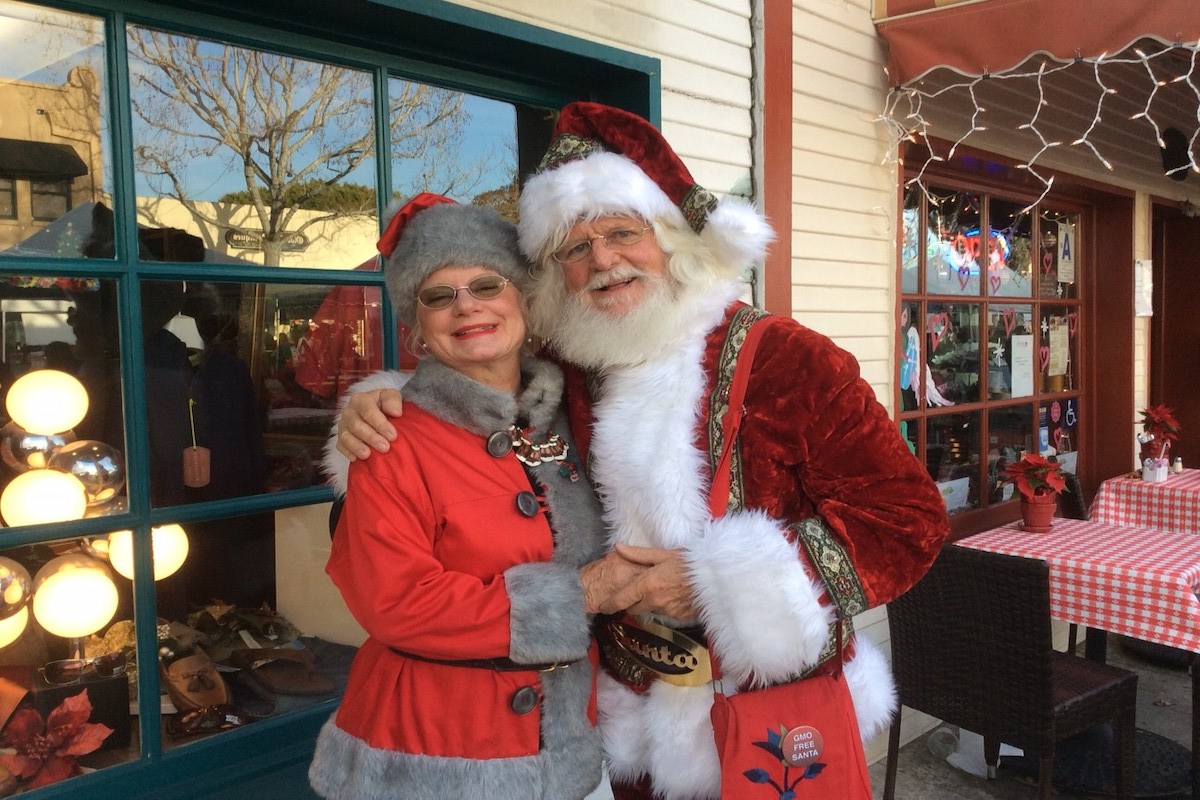 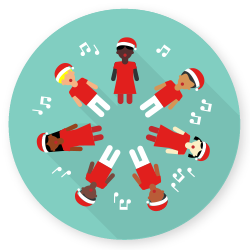 Can Santa be a health promoting professional? Forget the Sugar-Coated Santa. Sustainable Santa® is coming to town, and he is leading the charge for an army of Healthy, Happy Santas who don’t pass out sugar candy canes but instead promote kids eating real food! Good old Saint Nick is getting with the program – eating healthier, slimming down and opting for surfing over sleigh rides—and he and the missus are eager to share their energized lifestyle with children and their parents. Richard Eckfield’s Sustainable Santa®  is a 21st Century “real bearded Santa” who lost more than 80 pounds through exercise and diet. Now his ambition is to “refocus America’s kids from wolfing down fast foods and treats to the joy of eating whole foods”—and he wants to switch the place for taking your picture with Santa “from the mall to the farmers’ market.”

Holidays, like Christmas, Easter, Thanksgiving even All Saints Day which now for the most part is celebrated as “Halloween” were all intended to bring us together with healthy and life-affirming traditions. Yet, sadly, most of our cultural events have been invaded by the processed food industry, heavily marketing their holiday-themed candy and sugar laden foodstuffs and beverages. Their efforts have become so pervasive many Americans now think Candy Canes, marshmallow bunnies and candy corns are the reason for these festivals.  Thankfully the Hypoglycemia Support Foundation (HSF) brings us the awakening to the awareness, education, and actions needed to empower people to once again achieve healthy lifestyles and recapturing our former life-affirming practices. Healthy blood sugar is at the foundation of preventing metabolic disease and maintaining metabolic health. Based in large measure on the findings of the HSF, the mission of Sustainable Santa® and the Real Santas United for Healthy Kids is one positive strategy for demonstrating that our sacred holidays have nothing to do with unhealthy processed foods, and that promotion of enjoying life affirming Real Foods are what deserves our adoration.

Eckfield travels around the state to community gatherings such as farmers’ markets, seed shows and concerts, where, in a Santa suit often worn with red tennis shoes, he presents to children a fit, contemporary contrast to the image of the blithe fat man wreathed in smoke conjured by the poem, “‘Twas the Night Before Christmas.” “That traditional American Santa is 195 years out of date,” says Sustainable Santa®. “We’re anxious to have Santa be the counselor who, in collaboration with the parents, urges kids to eat healthy and live a sustainable lifestyle.” 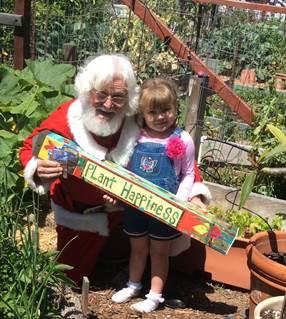 Step one encourages Santas to share three “Food Rules,” inspired by both food journalist Michael Pollan and the lifestyle practices followed by families in Europe.  Eckfield says it takes just seconds for a Santa to teach a child these simple rules, such as “If you are hungry, eat an apple. If you’re not hungry enough to eat an apple, then you’re probably not hungry – in other words, don’t eat just to have something to do.” Collectively, the 3 Food Rules helps children break the habit and pattern of eating fast, snack, and processed foods which have become the staple of the SAD (Standard American Diet).

Step two is to encourage kids to “Eat Real Food” by placing “Healthy, Happy Santas” into farmers’ markets where it’s easy to embolden kids to try new fruits and vegetables (eat the rainbow!) and even fermented foods. The farmers and Santas team to present what they call “Garden Bites” tastes of real food for the kids to sample at the markets.

Step three is to recognize that if America’s goal is to “be Great again,” then first we must become healthy again. The Santas believe they can play a productive role in reversing the past three decades long trend of consuming unhealthy food-like substances in favor of consuming nutritious fresh, whole, real foods which will make kids “Healthy, Happy and Fit for Life” – the goal which the Santas share with the parents.

The passion Sustainable Santa®. feels for his mission is apparent in his voice when he talks about the positive effect a few words from Santa can have on a child. “The bottom line is Santa is still Santa, and the Real Santas United for Healthy Kids clearly care about kids. If Santa says ‘try this,’ kids are likely to try it with an open mind.” He says the aha moment he sees most frequently is when a child bites into a raw vegetable, often to the astonishment of mom and dad. “I see the child eating it, turning around and saying ‘Wow, this tastes good!’”

Sustainable Santa® has attracted the attention of global health leader Dr. Robert Lustig, who states: “The true meaning of Christmas has nothing to do with eating sugar laden processed foods. Richard Eckfield is leading a movement to retake our holidays back from the processed food industry.” 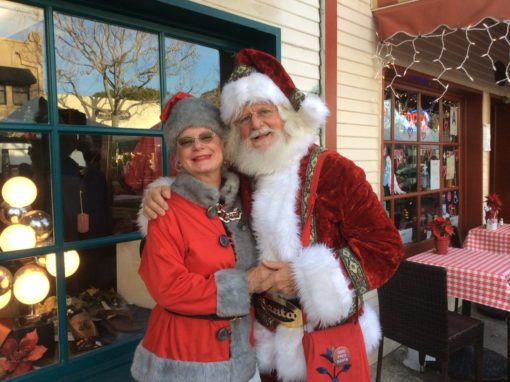 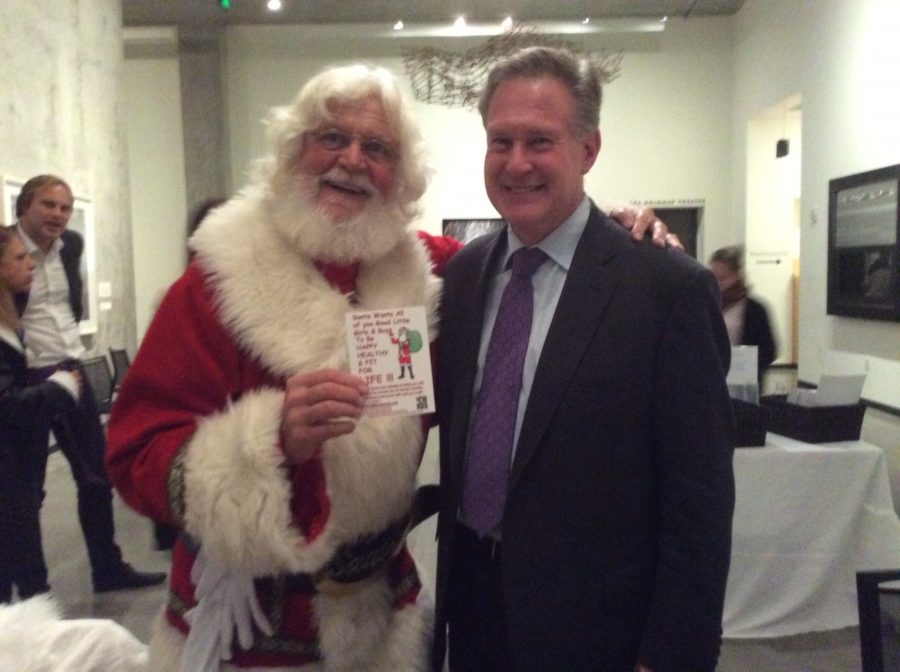 The Real Santas United for Healthy Kids are no longer a sugar Santa marketing tool.

Santa has been used to sell junk food & sugary beverages.

The Hypoglycemia Support Foundation and other groups concerned with children’s health support this important movement to take back Santa from ambitious marketers who want you to believe Santa is a jolly purveyor of sugary beverages and processed foods. The current image of Santa was shaped by soda pop marketing.

Today the 21st Century American Real Santas United for Health Kids together with their equal partners, the members of the Corps of Lady Santas (CLaS) who are modeled after the freestanding Women Christmas Icons found in Europe want to change that.  “Our country’s future depends on having a new generation of children who are healthy, happy and fit to live a sustainable lifestyle” say the Santas. “All of our systems, from health care, to social security, to paying for and balancing our national budget depend on avoiding the unnecessary health care expenses created by the current SAD (Standard American Diet).  Plus, by eating wholesome Real Food our children will experience true happiness and lifestyle satisfaction. What better gift can Santa help give than that?” 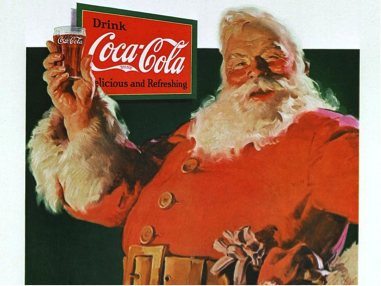